Toledo has a history of being very ethnic with strong European beliefs and customs. When William J. Sujkowski settled here in 1881, it was a diverse town with a large Polish population. William was very proud of his Polish heritage and wanted to show his appreciation. He established the Sujkowski Funeral Home in North Toledo in the 2800 block of LaGrange Street.

Little did William realize he had created a tradition that would last well over a century. His funeral home contained a storefront with a complete display of caskets. Business rose steadily, particularly among Polish clients, and in 1920, he opened a second store in South Toledo at 1320 Nebraska Avenue.

Valentine Sujkowski remembers how he started working in the family business in 1939. He had just graduated from high school. We had funerals in the homes of the deceased, he remembers. We'd move furniture and put canvas on the floor. The Polish have a strong belief in cleanliness. Valentine recalls how caskets were often too large to fit through the doorways so they were put through windows. The family often took a horse and buggy to a funeral call, and had to take candles and batteries in case the home had no electricity. Their fee was $2.50 which included the cost of feed for the horse. The whole family was involved in the business. Valentine's mother often sewed funeral dresses. His sister Louise was a beautician and handled the hair and makeup. His other two sisters, Sally (Goldyn) and Alvina (Sobieralski) often lined up traffic or drove the limousine or hearse.

Funeral trends changed after World War II. Funerals were being held exclusively in funeral homes. The age of the automobile did away with horse and buggy setups. Valentine remembers other changes. In the early 1900's, epidemics might kill hundreds of people at a time. In fact, Sujkowski recalls hearing of an epidemic where 200 children needed to be buried. And if someone died on Sunday or Monday, the funeral was held the following Saturday he recalls. No one wanted to miss work. 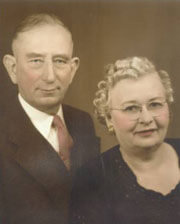 Valentine Sujkowski was a member of the army medical corp. He was also a prisoner of war. This experience taught him how to be a survivor, how to get along with others and, because of his working with Polish doctors while a prisoner, how to speak Polish.

A lot of our early business was displaced persons, people arriving from Europe who were just locating in the area, Valentine says. Many were Polish, and I could offer help and speak the language.

Many of the clients of the Sujkowski Funeral Home Northpointe, are returning customers, people who know the family's name and dedication to quality service and the family's philosophy. I always try to put myself in their position. I treat people with the same respect and kindness I'd want.

Valentine's son, Hilary J. Sujkowski, has worked in the funeral business since high school. He is a graduate of the University of Toledo and the Cincinnati College of Mortuary Science. Hilary became a licensed funeral director and embalmer in 1980 and along with his wife, Amy (Seeman) Sujkowski is now co owner and operator of Sujkowski Funeral Home Northpointe on East Alexis Rd. To assist in the growing needs of the families they serve, the staff has been expanded to include funeral directors and embalmers, Mrs. Amber Stranyak-Keesee and Mrs. Barbara Kovacs and funeral director, Ms. Jennifer Meehan.

"I'm proud of our family and staff, proud of making people
a little more comfortable during a difficult time, Valentine says.
We care about the people we serve."

We stand ready to assist you. If a death has occurred, please call us on the number below:

A year of daily grief support

Our support in your time of need does not end after the funeral services.  Enter your email below to receive a grief support message from us each day for a year.  You can unsubscribe at any time.